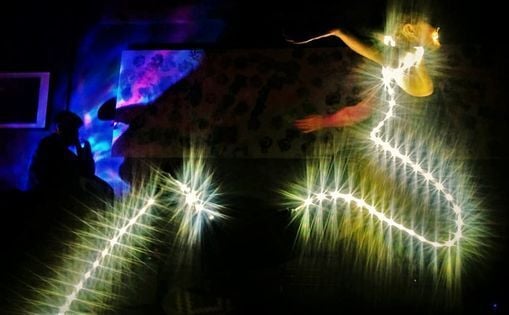 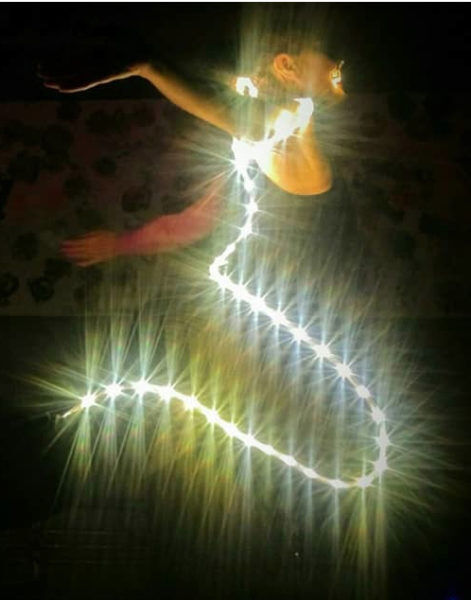 Asheville-based artist Cilla Vee presents Angel of Light, a durational performance in the Museum’s oculus window, viewable from the plaza and beyond. The performance will take place at 7 p.m. on Tuesday, March 9.

Marking the one-year anniversary of the COVID-19 state of emergency declaration for the City of Asheville, Angel of Light brings promises of hope and redemption. For the past year the Angel has held vigil over the city—a small, dim light at the end of the tunnel, growing larger and brighter until finally visible to all.

Angel of Light is the most recent piece in Cilla Vee’s pandemic performance series VIGIL: Prayers of Healing for the Living and the Dead, and was created specifically for her home community of Asheville. The series was developed over the summer in New York through the art organization Chashama’s “Enliven NYC” grant funded by the National Endowment for the Arts and the New York State Council on the Arts. Cilla Vee performed 30 prayers in 30 days in a storefront gallery space on the Brooklyn Bridge Park waterfront, viewable through the storefront window. Upon completion of her NYC residency, Cilla Vee felt compelled to bring VIGIL to her home community and create a performance specifically for the City of Asheville.

Cilla Vee is the artist moniker of interdisciplinary artist Claire Elizabeth Barratt. She is the director of Cilla Vee Life Arts, an international arts organization for cross-disciplinary and collaborative projects. Her background is in performing arts, with training in her native British Royal Academy of Dance, Laban Center at Goldsmiths College, and London Studio Centre. She has a graduate degree in fine arts from the Transart Institute for Creative Research with Plymouth University, where she developed her performance method and pedagogy called “Living Art.” Barratt served as an apprentice with the Isadora Duncan Dance Foundation in New York and as a founding director for Circle Modern Dance in Knoxville, TN. She is based in Asheville, NC where she has worked with local organizations such as Asheville Contemporary Dance Theatre, Black Mountain College Museum + Art Center, and the Asheville Art Museum. Recent information about Cilla Vee projects can be found on Instagram at #cillaveelifearts.