You have permission to edit this article.
Edit
Welcome, Guest
Arts + Culture
Entertainment
Festivals + Events
Food + Drink
Outdoors
Out + About
Calendar
1 of 3 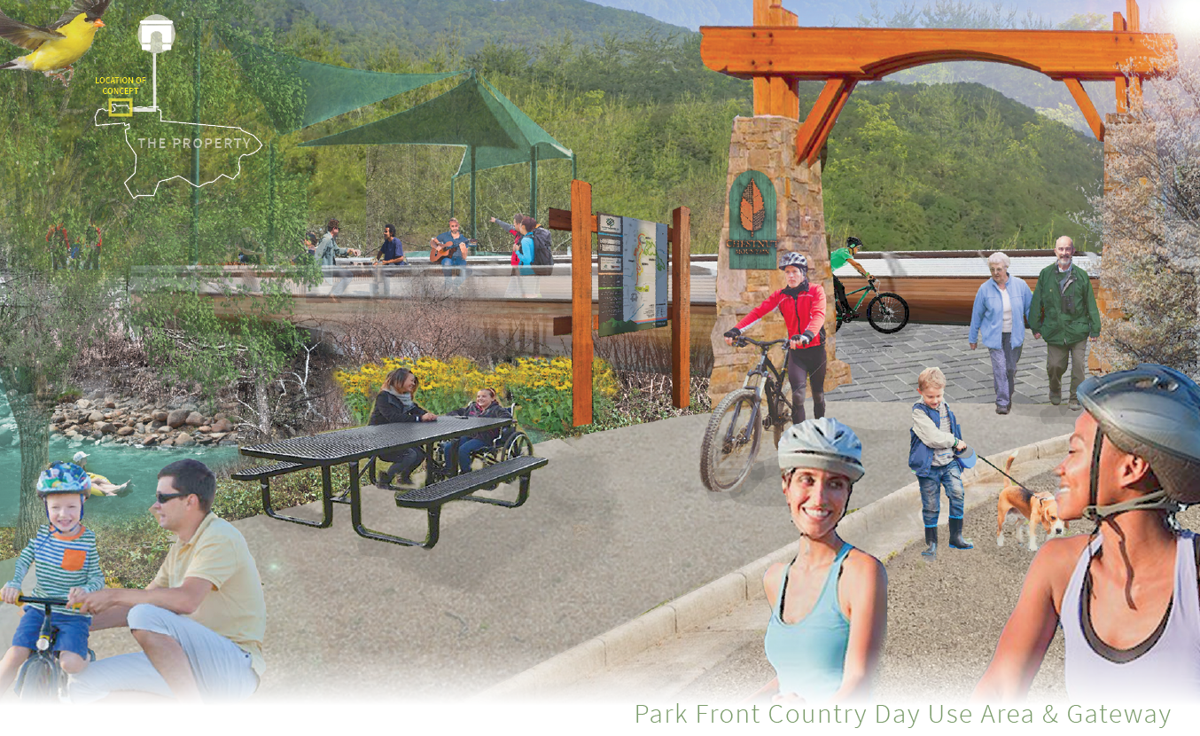 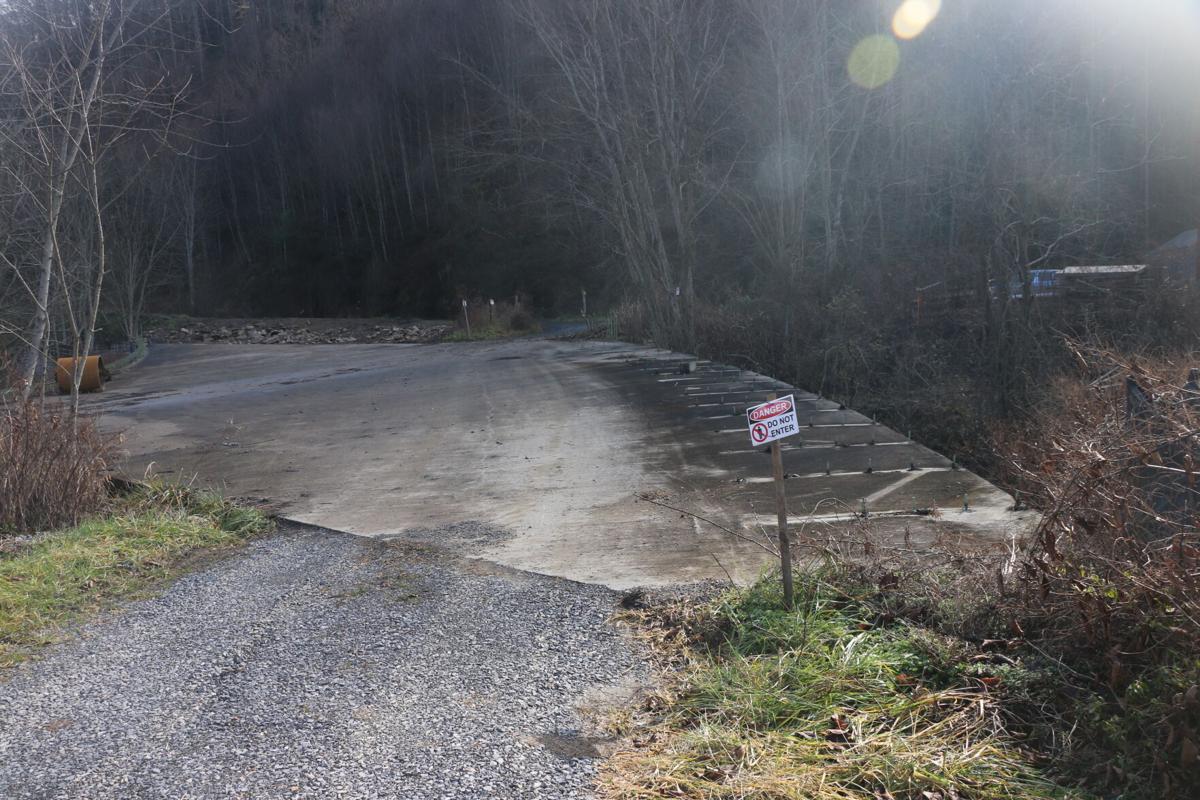 A bridge built decades ago over Hominy Creek to serve a racetrack proposed on Chestnut Mountain has long sat idle. Under park development plans, it will be converted into a scenic entrance to the park. 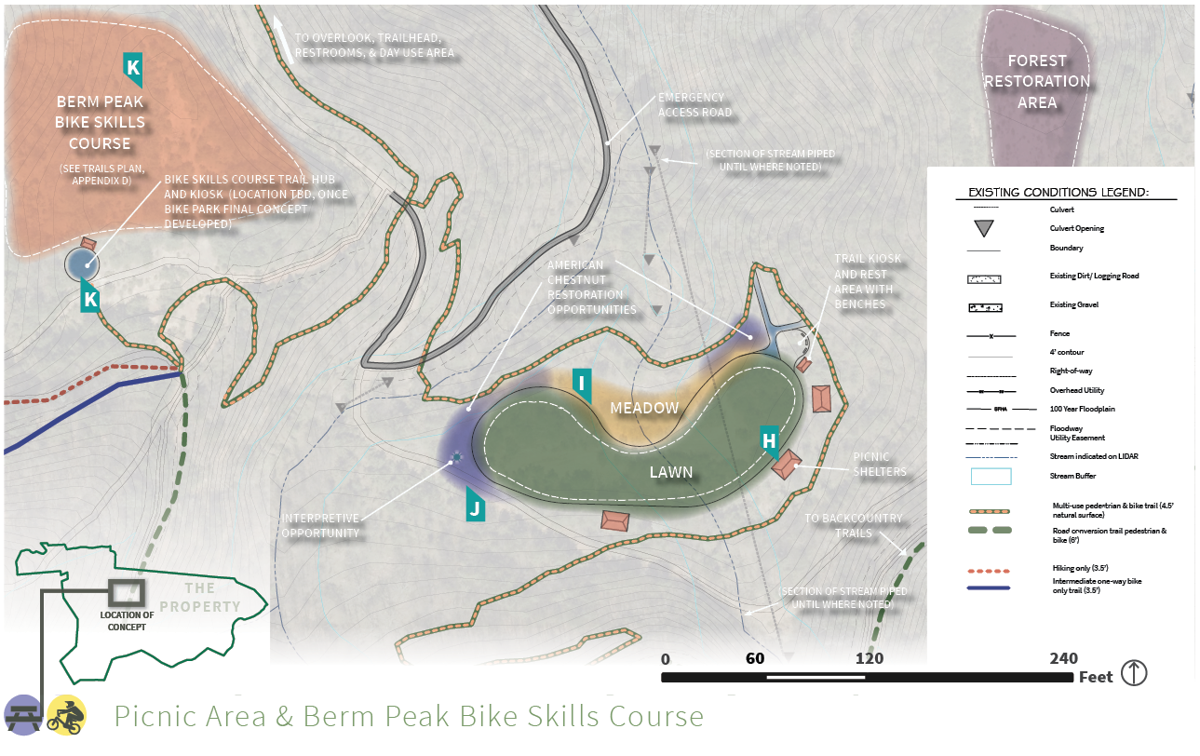 A bridge built decades ago over Hominy Creek to serve a racetrack proposed on Chestnut Mountain has long sat idle. Under park development plans, it will be converted into a scenic entrance to the park.

Plans are in place to turn a 450-acre area near the Haywood/Buncombe county line into an outdoor mecca that includes hiking and biking trails, camping/picnic areas, a tyke bike park, an event space with a pavilion and a place where those of all ages will be able to enjoy the outdoors.

Berm Park will be an area within the larger park where mountain bikers of all skill levels will be able to ride trails for free. The development is thanks to Seth Alvo, a Mills River mountain biker who has made a name for himself internationally with his YouTube channel @sethsbikehacks.

Alvo turned his backyard into a miniature downhill mountain bike park, which has become the background for many of his family friendly videos shown on his channels Berm Peak and Berm Peak Express. His videos feature virtually every aspect of mountain biking and his audience has grown to more than 2 million subscribers.

Alvo was searching for a place to build a free public bike park, and in his video, said he was striking out — until he approached the town of Canton.

With the recently acquired Chestnut Mountain, the town definitely had a place for the park, and Alvo’s offer was generous. He would sign a contract to construct the $200,000 trail network for mountain bikers, as well as maintain the trails.

“When he approached us, it was a lightbulb moment from beginning when we started conversations,” said Nick Scheuer, Canton’s assistant town manager. “Under the arrangement, we would provide the property, include the design of his bike park within our overall planning, and he was responsible for funding and maintenance.”

Alvo told his viewers it would take longer and cost more to build trails on public land, but said the trade-off is that he wouldn’t need to run a park, charge fees to cover the cost or carry costly liability insurance.

He already has raised more than $70,000 for the park from his subscribers and is seeking major sponsors for the effort. Alvo has pledged that all funds raised through his Patreon account that allows subscribers to receive extra content and early notices will go toward funding the Berm Park effort.

Scheuer said Berm Park will be a huge community asset where everyone from “little kids to seasoned pros” have a place to go.

Southern Appalachian Highlands Conservancy acquired the 448-acre tract on Chestnut Mountain, located along U.S. 19-23 near the Buncombe-Haywood County line, east of Canton to protect the land from future development.

A $150,000 environmental grant to aid SAHC’s purchase was announced by N.C. Attorney General Josh Stein on March 11. That funding was paired with another $1.2 million grant received in 2019 from the N.C. Clean Water Management Trust Fund.

This summer, the property was deeded to the Town of Canton, which will oversee the property’s development into a conservation-based park for outdoor recreation.

“To be able to preserve one of God’s greatest gifts, our natural resources, to be sure it isn’t developed, is a tremendous asset,” said Canton Mayor Zeb Smathers. “I think this is one of those things that we can take to the public to say, ‘this is the way the future’s going to look.’”

The planning phase was a shared effort with Canton, Haywood County and the Cruso Endowment Fund splitting a $75,000 bill to hire two Asheville-based companies — landscape architecture firm Equinox Environmental, which crafted a master plan based on plenty of citizen input, and Elevated Trail Design, which oversaw the trail design work.

The plan has been approved by the Canton governing board and a $250,000 RTP grant application has been submitted to help complete Phase 1 of the plan.

This phase includes a temporary trailhead, with a gravel parking lot and bridge improvements, about eight miles of trails, primitive camping sites and scenic overlooks.

“We know we are creating a legacy project that will be around for a long time,” Scheuer said. “Our goal is to have 15-18 miles of trails, a climbing trail to the top of the mountain with a viewing structure, back country campsites, a bicycle playground specifically made for very small children, a mini pump track and trails for all ages and skill levels.”

The park development will be done with the help from plenty of funding partners who see the potential economic and recreation value of the project, as well as partners such as Haywood Waterways Association that will help to remove invasive plants and work on stream restoration efforts along the section of Hominy Creek that runs through the property.

A recurring theme throughout the park planning is that conservation and recreation have to co-exist, he said. The town is banking on that combination to attract grant funds from multiple sources for the estimated $1.7 million project.

Initial projections show town and county funding of $400,000 is needed to complete the project.

Studies will be conducted to gauge the economic impacts of the park, but Scheuer said one study showed there was a $110 million impact from outdoor recreation in the region, and statistics for this year indicate the outdoor recreation industry during the days of COVID grew 600 percent. Enjoying the great outdoors is likely to continue for newfound enthusiasts, he predicted.

The town has started conversations with Haywood Community College to do forestry management, and Western Carolina University to do a study on the economic impact of the park. In addition, graduate students could be encouraged to do internships or master level thesis projects that would help in the park’s development, Scheuer said.

“In addition to enhancing the quality of life here, we expect the park to bring people here who will patronize our town,” Scheuer said. “In Western North Carolina, I think if we build it, they will come. At Bent Creek, Dupont and other places in the region, parking lots are at capacity. This will help take heat off other places. The more that are built, the more people will travel and enjoy the region.”